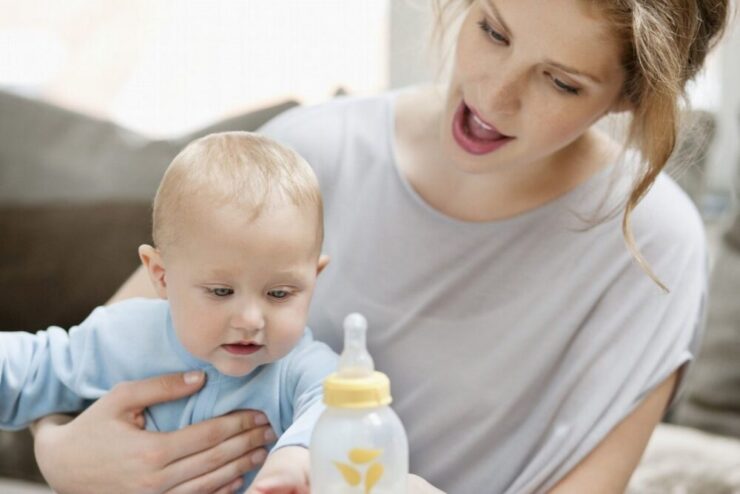 Every night, your kid weeps for hours at a time, and this problem continues for weeks, to the point where you feel like crying as well, but then the inevitable question arises, what could be the main cause of the late-night cries of the baby? If it’s Colic or Gas, then what is the best formula for Colic and Gas?

According to several experts, the inconsolable crying of an infant that generally goes on for hours a day, starting in his second week on earth and expanding to like when he or she is 3 months old is what is deemed to be Colic. A Dr. Morris Wessel conducted a groundbreaking study on this situation about 40 years ago, although his definition of colic was not scientifically considered, it was still regarded nonetheless.

Gas might aid colic in babies, as it is generated in the intestines by bacteria and can be swallowed into the bowels as well. Gas pain affects almost every child to some extent, both breast-fed and bottle-fed children alike.

While gas pain is prevalent and can affect a kid at any age, it is particularly jarring in newborns and young babies between one and four months of age as they develop their guts.

Also, some children appear to suffer more from inherent and environmental factors, which can further blur the lines to causes and symptoms of a gassy baby.

Colic is considered an attack of weeping and is what, in young infancy seems to be abdominal pain. It is a prevalent disorder that affects as much as 1 in every 5 babies during their first few months, according to statistics.

There are numerous reasons, for which babies scream, it could be hunger, cold, tiredness, heat, or the need to change the diaper. But even after being fed, cleaned, and well taken care of, an infant might still weep.

If an infant has bouts of inconsolable weeping repeatedly but appears to be healthy and well, the problem might be colic hence the need for a colic baby formula. It can be highly taxing to look after a colicky baby, so you should see to it that you take care of yourself too. Do not play the blame game during colic — it is nobody’s fault.

Try to relax and remember that this stage will ultimately pass and everything will be as right as rain. Most family and friends are often ready to help cuddle your baby when you need some time for yourself.

Maybe your baby’s temperature is 100.4 ° F (38 ° C) or higher, weeps for more than 2 hours at a time, is inconsolable, does not eat well, has diarrhea or constant vomiting, or is less awake or alert than usual; then you have to call your doctor.

In a situation where you’re sure it’s colic then you have to find the best formula for colic and gas.

What is the difference between Colic and an ordinary weeping child?

There is no clear line that distinguishes colic from other kinds of baby-crying, but doctors are known to generally say, the difference between colic and ordinary baby crying is that kid appears inconsolable as crying turns to wailing, and the incident can last for 3 hours or much longer.

Constipation is a disorder of the digestive system in which a person has difficulty in dislodging hard feces. This is mostly as a result of the colon absorbing too much water from the food in the bowel.

If your child makes straining faces with several of her antics and then combines it with a hard stomach that is painful to touch, it might all lead to the fact that your baby is suffering from constipation. If he or she refuses to eat, it may yet be another symptom of constipation. It is essential to remember that the poop schedules of children can swing in different directions.

Some exclusively breastfed babies poop after every meal; others have been known to hold out for a week or longer. When there is a prolonged lack of poop, parents often suspect constipation and rightfully so.

This can certainly be a manifestation of constipation. If a baby doesn’t have at least several bright, yellow (not dark brown or green) poops by the time he’s 5 days old, something could be wrong, regardless of either breast milk or formula and also, it could be due to baby not eating enough.

When heavy foods get introduced to the baby, parents should be ready for a change in frequency, shape, and color of baby poops. But as a reference frame, children between 0 and 4 months of age, stool three to four times a day on average and after the implementation of strong substances, this decreases the amount to about one per day.

Causes and symptoms of colic

Doctors haven’t figured out what causes colic. Physicians usually thought it was caused by cow milk intolerance, but seeing as even breastfed babies are being diagnosed with it, they are beginning to think otherwise.

For mothers who breastfeed their babies, they are at the advantage because the mother’s nutritional modifications can aid control and relieve colic in babies, hence quitting caffeine products or eliminating cow milk consumption could produce positive changes that will lead to the comfort of your baby. Below is a short list of things that can result in a colicky baby.

Symptoms of a colicky baby

You can also observe a colicky baby when the baby;

Causes and Symptoms of Gas

Typically, when a baby is experiencing pain from gas, the stomach is inflated with air. This can be as a result of the baby’s digestion method, or the baby has swallowed up a lot of air while feeding. Baby gas may cause bloating, pain, or irritation. Below are some prevalent causes of a gassy baby.

Symptoms of a Gassy Baby

Your baby is probably gassy if he or she is, Red-faced weeping clenches the fists after feeding, holding legs up to the stomach, etc. The way to know for sure that baby gas is to blame is when baby blows or releases gas.

These gassy baby symptoms, however, can sometimes show another issue. When a child continues to cry despite passing gas, you realize that something else is happening, it could be reflux, constipation or colic, which is sometimes mistaken for the issue of prolonged baby gassiness.

Constipation is often confused with baby gas, too, with baby writhing and fighting. But if the stool is not smooth, then it’s more likely to be a constipated baby especially if it comes out in hard pellets.

Though your child appears to be struggling to poop, it may be just what physicians call childhood Dyskinesia or infant practicing with their muscles to push out the bowel movement. This struggle can look like baby gas and can also cause inconveniences related to constipation.

Considerations for picking the best formula for colic and gas

Below are some essential features that we’ve checked out before selecting our best formula for colic and gas you should see too.

5 Best Formula for Colic and Gas 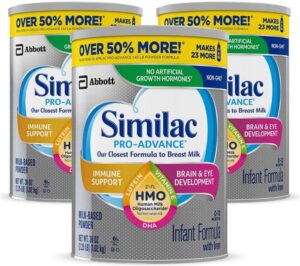 Similac Pro-Advance with 2′-FL human milk oligosaccharide (HMO) offers free assistance by encouraging immune cells to release the protein in quantities that are more similar to the breastfed child. Offering the best formula to breastfeeding, it is also the foremost formula for infants with no hormones or artificial development.

After just one day of feeding, parents recorded a decrease in fussiness, gassiness, weeping, and spit-up. This fantastic improvement was maintained while feeding the formula to the baby.

Similac’s unique combination of DHA, Lutein, and Vitamin E is essential to support the growth of the brain and eye of babies. It is the number one formula brand selected by moms and also the number one brand fed in clinics according to statistics. Therefore this is a brand you can trust. 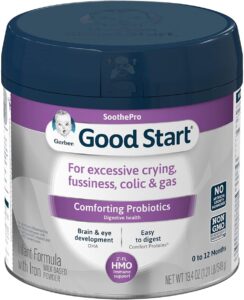 Gerber Good Start Soothe formula is intended to ease and ultimately eliminate, excessive weeping and colic, fussiness, gas, and mild spit-up in infants. This is the only formula with HMO (Human Milk Oligosaccharides) and Probiotics. The study has shown that HMOs promote digestive health and immune system development in little children.

Gerber Good Start Soothe formula has an exclusive soothing Probiotic L Reuteri that in colicky babies has been clinically proven to decrease crying time. A 30 percent carbohydrate mixture of lactose helps relieve fuss and gas. This product contains DHA, which is highly recommended by experts. 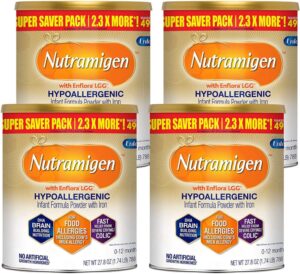 This is the first and only Baby formula discovered to contain both the quantity of brain-nourishing inositol and DHA that is in breast milk. A unique Triple Health Guard combination, containing 30 nutrients for development, This formula has twice the Omega-3 DHA as other highly recommended natural health products.

Fully fortified with vitamins & minerals, Enfamil’s premium Gentlease Infant Formula product is undoubtedly one of the best formulas for colic and gas in babies as pediatricians recommend it.

This is one of the closest to breast milk formulas for colic and gas with a worldwide average concentration of mature Inositol breast milk: 22 mg/100 kcal. 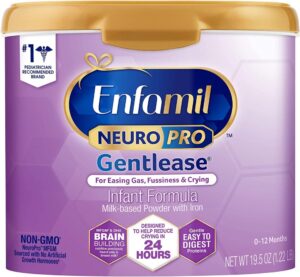 Nutramigen with Enflora LGG is hypoallergenic that is fortified with iron. This infant formula is produced for babies with an allergy to cow’s milk protein and soy baby formulas.

Most kids must wait 3-5 years to overcome their allergy to milk. However, most babies don’t have to wait that long with Nutramigen LGG. Clinical information has shown that this formula can help infants return to their dairy products in as little as 6 months without dealing with an allergic reaction.

Enfamil’s Nutramigen formula Starts colic treatment as soon as the first dose is taken, with 90% of babies showing improvement in 48 hours! This formula from Enfamil includes both widely hydrolyzed, casein protein -which is useful in a colic baby formula- and Enflora LGG.

These two nutrients provide a more extensive solution to helping children feel better in the shortest time possible. This formula also includes DHA and ARA to promote the growth of the brain as well as the eye of your baby. 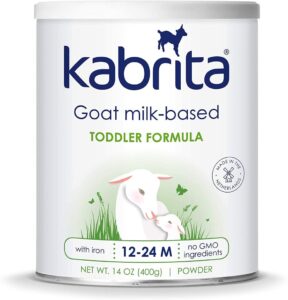 Kabrita Goat Milk formula is very easy to digest as it is mild on baby tummies. Proudly produced in the Netherlands where rigid European laws restrict the use of antibiotics, pesticides, and hormones.

Kabrita is produced with high-quality non-GMO products, no added glucose syrup solids, and is free of heavy metals, which is a very big plus because unfortunately even some of the best formulas for colic and gas still are not entirely free of metals. With 22 vitamins and minerals, DHA and Prebiotic GOS, Kabrita is designed like breast milk.

Our babies are our little angels, and they deserve all of our love and care. Colic and gas in babies affect both the babies and the mothers, and during such time, they need all the help they can get. This is why finding the best formula for colic and gas is very vital.

This two would tick all the boxes of consideration in picking the best formula for colic and gas.

Your search for the best formula for colic and gas to save your child from the painful colicky cries may be daunting, but it’s just one of the many things we do for our little angels. Also, to reducing colic, the correct colic baby formula should decrease acid reflux and aid constipation. The formula must contain a wealth of right nutrients that support overall growth.

Remember to search for a formula with, DHA that is a significant element of brain development and because it requires time to find the best formula for colic and gas hence this review.