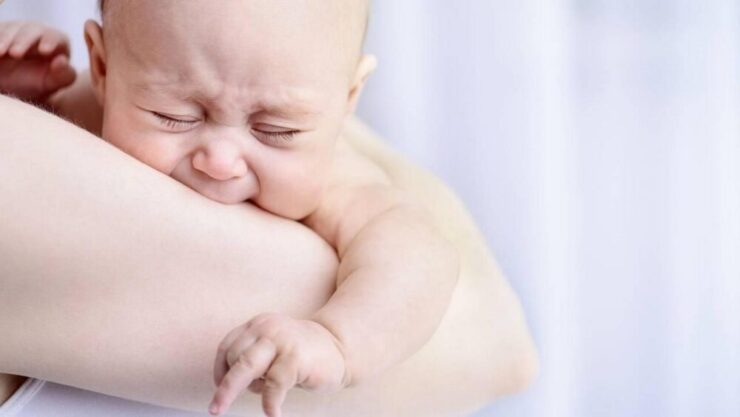 Raising a baby is always tricky. Part of the difficulty is determining when the baby is sick or not. Somehow, as a mother, you can tell if something is wrong with the baby or not. But what if you are not entirely sure of what is wrong with him/her or you misdiagnose his illness for another?

Silent reflux is a type of reflux where stomach contents flow backward into the nasal passages, voice box or throat. The stomach contents don’t get expelled from the mouth; it stays in the stomach and flows back to the back of the throat where it causes the baby distress. Hence, the reason why it is called silent.

Silent reflux creates a burning sensation around the throat area. Since food contents are in the stomach, the food mixes with the acid produced by the stomach and flows back to the throat. When this acid comes in contact with the throat, voice box, or nasal passages, it irritates them, and the baby will always feel like something is obstructing his throat. Hence, the frequent clearing.

Silent reflux is common in babies who are a few weeks old to one year and affects one in every five babies. Silent reflux doesn’t usually persist in babies beyond the one year mark, but if it does, you must take that baby to a pediatrician. Also known as laryngopharyngeal reflux (LPR) because it affects the larynx (voice box) and pharynx (throat).

Since it’s silent reflux, there is no outward symptom to determine if a baby has it or not. It is difficult for parents to pinpoint if their few weeks old baby has reflux because technically, he/she doesn’t show any sign of it and may not describe it. The only way to know if such a baby has reflux is if he/she finds it easy to spit up.

However, It’s more noticeable in older babies because they may describe how lumpy their throats is and how bitter their mouths taste. One thing silent reflux doesn’t cause is heartburn or indigestion as they are symptoms of acid reflux.

As babies grow, these esophageal sphincter muscles become more developed, which means coordination will be improved. The rate at which contents are passed will also be reduced, and the chances of getting silent reflux are also minimized. This is one of the reasons why silent reflux in older babies is minimal.

Babies always lie on their backs. This could be another factor that triggers silent reflux because the baby won’t be able to keep food in the stomach. A baby whose diet is based on 90% liquid also has a chance of having silent reflux because fluid tends to trigger reflux more than solid foods.

Signs That Your Baby May Have Silent Reflux

The following are some of the visible signs that your baby may have silent reflux. They include;

1. Keep your baby upright after feeding

Some parents are fond of letting them babies lie on the bed immediately after feeding. This is bad and can cause silent reflux. After feeding, ensure the baby stays out of bed or in any lying position. The baby should sit upright for at least thirty minutes before any further activity.

Give your baby a smaller quantity of food frequently and not so much at once. For example, if you are giving the baby 2.2 ounces of Similac Sensitive Infant Formula every four hours, you should change it by providing the baby 1.1 ounces every two hours. When you feed your baby like this, you are reducing the chances of him/her getting silent reflux.

3. Let the baby sleep in an inclined position

While putting the baby in this position, ensure that the baby is lying on his/her back as well. This will not only prevent silent reflux but prevent the baby from suffocating.

4. Burp the baby frequently during feeding

Sometimes, the baby wakes up 30 – 45 minutes after feeding crying and in utter distress. They are crying because they are in pain. The causative factor may be that gases have built up in the baby, and this means the baby has reflux. Before the baby takes a nap, burp the baby for as long as possible. Burping him/her frequently will eliminate gases from his system. This way, the baby won’t have any difficulty sleeping and would not have reflux

5. Before napping, hold the baby in an upright position

After breastfeeding and may be done with other things like bathing him and changing diapers, hold the baby in an upright position in your hands for a few minutes. You can hold the baby on your chest, in an infant seat as well, but the goal is to keep the babysitting upright.

Babies lying down horizontally are prone to reflux because stomach contents don’t experience gravity. Hence, the contents of the stomach tend to flow back to the esophagus because the digestive system is still underdeveloped. Keeping the baby upright for as long as possible will eliminate all reflux-like symptoms from getting to the baby. If possible, keep the baby upright while feeding him/her.

While bottle-feeding your baby, ensure that the bottle is held at an angle that allows the nipple to stay full of milk. This process is necessary because the baby will take in lesser air while sucking the milk out of the bottle. If otherwise, the baby will swallow a lot of air and gases will build up, leading to reflux. Swallowing air can increase pressure around the small intestine and lead to reflux.

Sometimes, the nipple might be either too small or too big for the baby’s mouth, and this causes swallowing of milk difficult as the baby will gasp for air. Try different nipples sizes to see which one suits your baby the best and give him/her the best seal around their mouth.

7. As a mother, examine and if possible, change your diet

Since babies feed directly off their mother’s breast, it is logical too to investigate the type of diet the mother is placed on. For mothers who are breastfeeding, make a list of the food you take and the habits you frequently indulge in that may affect the health of the baby. At this point, it is necessary to get in touch with a doctor.

If your diet includes taking acidic food substances like citrus fruits, tomatoes, eggs, dairy products like milk, adjust and avoid taking them for the time being till your baby’s reflux symptoms declines. You should also restrict your intake of fats, chocolate, oily, and spicy foods. Caffeine and carbonated drinks should also be among the list of food items to avoid in your diet. If you are a smoker as well, for the health of the baby, you should stop smoking as soon as possible.

8. Avoid any physical activity with your baby after feeding

Restrict from engaging in any physical activity like playing with your baby after he/she is fed. Avoid bending, or rolling babies as the food they have eaten is rolled back to the esophagus, causing reflux. Engage the baby in another activity that doesn’t involve the ones stated above.

Somehow, this home remedy works in reducing or preventing silent reflux in babies. Remember, you have to refrain from engaging the baby in any physical activity. Allow the baby to lie down on his back, take his/her two legs, and move it like he is riding a bicycle. The food content in his/her stomach will be digested faster, and any chance of reflux-like symptoms happening will be curtailed.

Also, you can naturally regulate silent reflux by giving the baby a massage. Try massaging the baby’s stomach with oils like coconut or olive. Massage the baby also on their back softly using gentle strokes to stimulate the nerve cells, which interlaces with the digestive tract and lungs. With this method, you are curbing his/her chances of getting silent reflux.

If your baby is still associated with having silent reflux continuously as most babies do, try adding 1/2 to 1 teaspoon of coconut oil to his/her drink (water and baby formula) or warm food. It is believed that coconut oil has anti-inflammatory properties which reduce the discomfort caused by silent reflux. However, always consult a pediatrician before this step, or any further action is taken.

These ten natural remedies are what you can try out at home if you notice any reflux-like symptoms in your baby. Over time as the baby grows and his digestive organs begin to get mature, silent reflux disappears.

As a mother, you may also consider using formulas that stop reflux, constipation, colic and sensitive tummy. If reflux persists and gets worse, consult a doctor to engage the baby in further tests such as endoscopy exam. The doctor may end up prescribing medications such as H2 blockers (nizatidine) or proton pump inhibitors like Nexium once silent reflux is beyond these natural remedies.